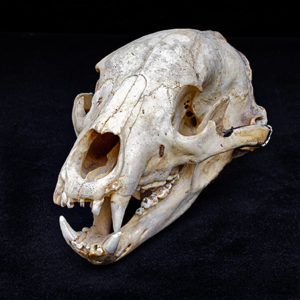 The skull we unwrapped — it was in a box that had been mailed from Montana to Los Angeles in the nineties — turned out to be a bear! I sent pictures to Mick Hager, the CEO of the San Diego Natural History Museum, who was kind enough to take a look at the images. He confirmed that it is a black bear’s skull by the teeth. These bears are omnivores that eat some meat as well as a mixed diet of berries and nuts so they need teeth that occlude for grinding. Interesting!

And I have no idea what I’ll do with it. But it’s kinda neat. Don’t you think?